For conservative force the change in potential energy is equal to negative work done. So, – W = Uf – Ui

From work energy theorem, the work done on the system is the change in kinetic energy. So, W = Kf – Ki

When non conservative forces like friction are acting on the system then total mechanical energy is not constant but work energy theorem is valid.

If conservative, non-conservative and external forces are acting on the system, then using work energy theorem we get, WC + WNC + Wext = Kf – Ki

Therefore, when work is done by the forces other than conservative forces (like non conservative and external), then it is equal to the change in mechanical energy.

Conservation of mechanical energy on smooth inclined plane: Let us consider a body of mass m is placed at point A on an inclined plane at height h from ground. The angle of inclination is

The potential energy at point A is P.E. = mgh

As the body is initially at rest at that point, then the kinetic energy at point A is K.E. = 0.

The total energy at point A is T.E. = mgh

The kinetic energy at point D is K.E. = 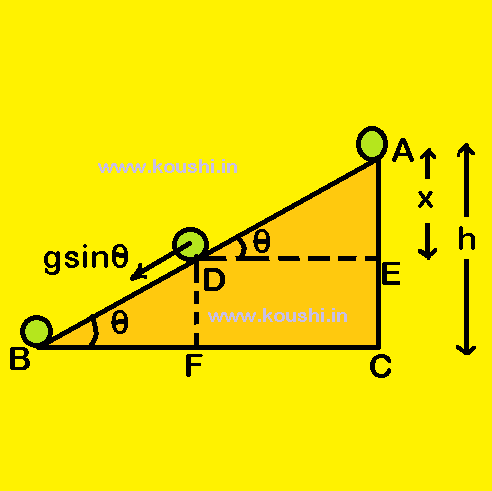 Let us consider the speed of the body before touching the ground at point B is v/.

At point B the height of the body from ground is zero. So, potential energy at point B is P.E. = 0

The kinetic energy at point B is K.E. =

The total energy at point D is T.E. = mgh

Therefore, the mechanical energy is conserved for a body moving on smooth inclined plane.

1. A body is displaced from point P to point Q. The kinetic energy and the potential energy of the body at point P and Q are given respectively KP = 25 J, UP = -15 J, KQ = 5 J and UQ = 8 J. Find the work done by (i) conservative forces (ii) all forces (iii) forces other than conservative forces.

For conservative force the change in potential energy is equal to negative work done.

According to work energy theorem, work done by all forces is equal to change in kinetic energy.

2. A weight less pan is fitted with a vertical spring as shown in figure. A block of mass m strikes the pan after falling through a height h. If the force constant of spring is k, then find the maximum compression of the spring.

Let us consider the maximum compression of the spring is x. Spring force and gravitational forces are conservative then using conservation of mechanical energy we get, 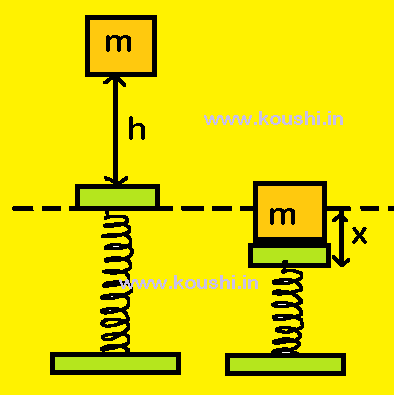 3. A uniform chain of length L mass M is held on a frictionless table with nth (<1) part of its length hanging over the edge. When the chain is released, find the velocity of the chain while leaving the table.

Let us considered the surface of the table as the zero potential or reference level.

from the reference level.

The initial potential energy of the hanging part of chain is 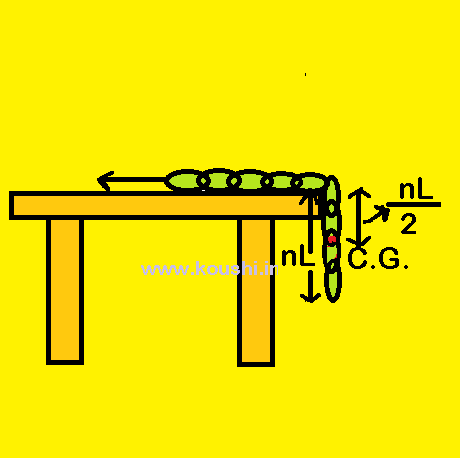 from the reference level.

Therefore, final potential energy of the hanging part of chain is Uf = –

Using conservation of energy we get, Ui + Ki = Uf + Kf 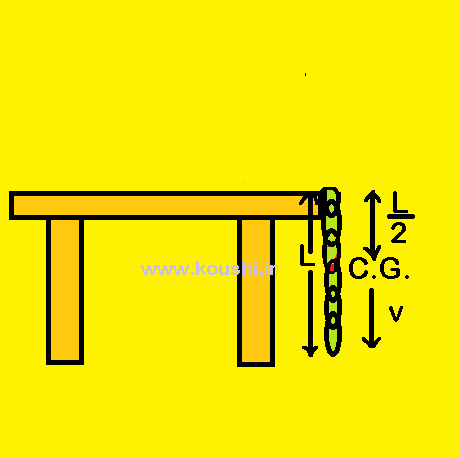 4. A block of mass 2m is suspended by a string of length l from celling. A bullet of mass m is moving horizontally and enters into the block. The block and the bullet move a maximum height. At the maximum height, the string creates angle 600 with vertical. If the string remains stretched at that condition find the tension on the string and the speed of the bullet before entering the block.

Let us consider the block is initially at point A and during maximum height it is at point B. BC is perpendicular on OA.

The speed of the block and bullet at point A [after bullet enters into the block] is v. 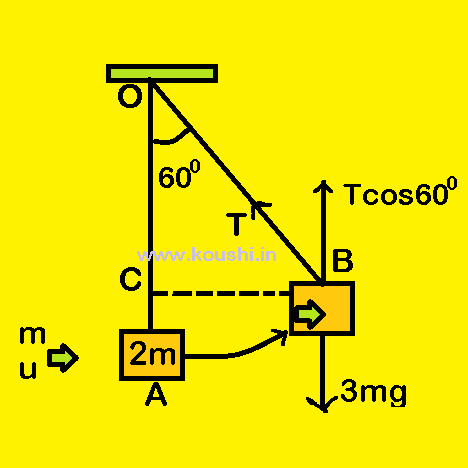 If the horizontal speed of the bullet before entering the block is u, then using conservation of linear momentum we get, mu + 2m = (m+2m)v